Question 1: How are vectors added and subtracted geometrically?

Addition of vectors by geometric method

Two or more than two vectors can be added geometrically. The method is popularly known as head-to-tail rule.

Draw the representative lines of all the vectors to be added. It should be taken mind that all vectors should be taken according to the same scale and direction map. Then draw the lines in such a way that the tail of one vector line coincides with the head of the other. In such a way all the vectors to be added are mapped. Finally, draw a line from the tail of the first vector to the tip of the last. Put an arrow-head at the end coinciding with the last vector which determines the direction of the resultant vector. The length of the line gives the magnitude of the resultant vector, according to the chosen scale.

In the following example, 3 displacement vectors are added. 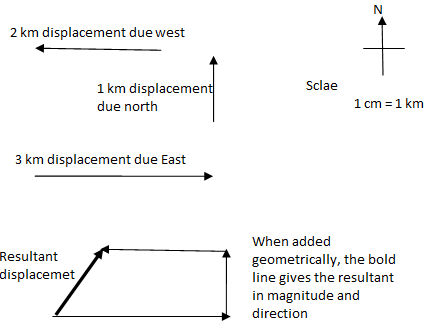 (Take two vectors A and B and show that A + B = B + A as an exercise. This is called the commutative property of vector addition).

Subtraction of vectors by geometric method

Let we want to find A – B. For this purpose, we first find – B. The negative of a vector is a vector whose magnitude is equal to the magnitude of the given vector, however, its direction is opposite to the original vector. It is given as below.

Now we have to simply add – B with A.  it is shown as below.

R is the resultant vector. Its length is equal to the magnitude of the required vector and its direction is the angle it makes with the positive x-axis in the anticlockwise direction.

Tagged Addition and subtraction of vectors