Skip to content Menu Close
June 1, 2020 Does a moving charge experiences a force in the magnetic field? 3 Comments

Question 3: Does a moving charge experiences a force in the magnetic field? Explain.

For a positive charge q introduced perpendicularly into a magnetic field B, it is observed that

Here v is the velocity of the charge q and θ is the angle between velocity and magnetic field (it is 90 deg in this case).

The unit vector n is in the direction of force experienced by the charge and can be determined by the Fleming’s Left Hand Rule. Under the action of this force, the charge will follow a circular path. Here, we note that the magnetic field neither speeds up nor slows down the particle but deflects the particle side way only. Therefore, the particle moves under the influence of constant magnetic force which provides the necessary centripetal force to the particle to keep it on the circular path.

Now if ‘r’ is the radius of the circular path and ‘m’ is the mass of the charged particle, the centripetal force is

Equations (1) and (2) are same. So comparing the magnitudes,

Since v/r = ω (angular velocity). Put this value in the above equation.

In the same way, radius of the circular path can also be found from the above equation (3).

Similarly, time period T of the particle can also be calculated.

And the frequency ‘f’ is the reciprocal of time period.

This frequency is called cyclotron frequency.

If the charge enters the field at certain angle θ other than 90o, then the particle moves along a spiral path. In fact the velocity components V sinθ moves the particle vertically and the component V cosθ moves it horizontally and the combined effect is a spiral trajectory. The deflection of charge particle in a magnetic field is used in television tubes, electron microscope, spectrographs and charged particle accelerators. 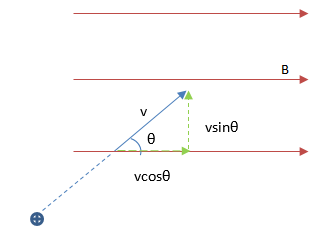