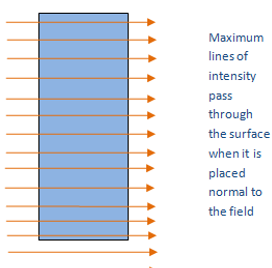 Electric flux is the number of electric field lines passing through a surface placed in the electric field. It is denoted by φ.
Mathematically,

Where E = Electric field intensity
A= Area placed in the field, and
θ = Angle between and .

From the above equation, unit of flux can be easily calculated. It is Nm2C-1.

As an example, 4 electric field lines are passing through the surface in the above figure. Therefore, flux through this area is 4 Nm2C-1.

(1) When the area A vector is making an angle other than 0° with the field lines, then

See in the figure below that (Acosθ) is parallel to E.

(Note: The same argument can be applied in case when the flux is non-uniform. When we divide the surface into small patches, then the flux through any such small surface is practically uniform.)

Electric flux depends upon E , A and the angle between them. However, if E and A are constant, then θ determines whether the flux to be more or less. If θ = 0°, cosθ = 1 which is the maximum value of cosθ. In such a case the surface area is placed perpendicular to the electric lines of force. See the figure.

When θ is 90° cosθ = 0, the flux through the area is minimum (=0). In such a case the area is placed parallel to the electric field lines as shown in the figure. No force lines pass through the surface.