Skip to content Menu Close
June 1, 2020 What is the minimum number of unequal vectors to result into a null vector? 4 Comments

Question 2: What is the minimum number of unequal vectors to result into a null vector? Explain with the help of a diagram.

On the minimum, three unequal vectors will give a zero resultant (or null vector). 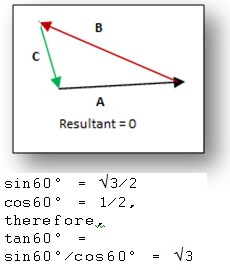 In the diagram three vectors

are added by head-to-tail method. The resultant vector is zero.

Note that two vectors can also give a zero resultant if they are equal and anti-parallel. However, the condition of the problem demands the vectors to be unequal. Therefore, we can’t take the case of two vectors.

The new course also has a similar questions.