Show that in angular form, centripetal acceleration is: 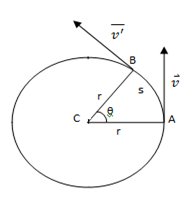 Consider a body moving in a circular path. Let at any instant of time t1 it is at a point A on the circumference of the circle. Suppose it moves with a velocity

and at time t2, it is positioned at point B on the circle. The motion is an accelerated one due to its changing direction and let’s further suppose its velocity to be

. If Δt is very small, point B and point A will be very close to one another and we can say,

Similarly, we know that

So, substituting for the value of ‘S’, in the above equation, we got

are opposite in direction to one another. In addition, we know that,

So to substitute for v in equation (1)

This proves the result.