Skip to content Menu Close
June 1, 2020 Prove that the projection of a body motion in a circle describes SHM. 4 Comments

Question 2: Prove that the projection of a body motion in a circle describes SHM.

Projection of circular motion as SHM

Let an object is moving along a circular path as shown in the figure. Suppose the angular velocity of the body is ω and the radius of the circle in which it moves is ‘r’. 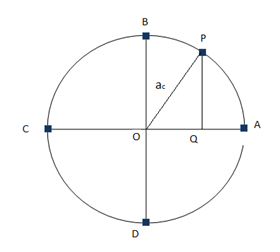 Now we have to show that the acceleration ax of the projection is directed toward the center and that, a ∝-x, where ‘x’ is the distance from the center along the diameter.

The direction of this acceleration is toward the mean position, therefore,

Now for the body moving along the circle with constant angular velocity ω, the centripetal acceleration is,

Substituting these values in the equation (A),

So the acceleration of the projection is directly proportional to the displacement and is directed toward the center, therefore, the oscillation is Simple Harmonic Motion.